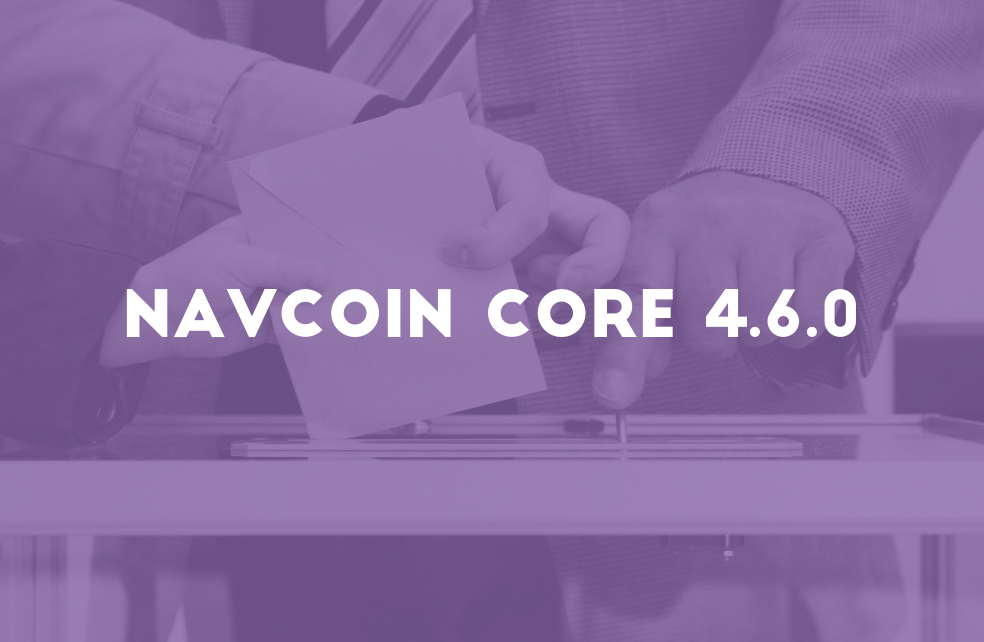 NavCoin Core 4.6.0 has been released, the inaugural Community Roundtable was a success, you can buy your groceries with NAV in Australia using GiftCards by Bidali and more.

After a successful testing cycle of the Release Candidate, NavCoin Core 4.6.0 has been officially released. This new version of NavCoin Core adds many new features including a graphical interface for the Community Fund, mnemonic seed phrase support and a patch to fix the bug which caused the recent network issues.

In total 26 Pull Requests were reviewed and merged into master for version 4.6.0 marking the culmination of the last 3 months of work on NavCoin Core.

While most of the changes are cosmetic or new features and there is no consensus change in this version, it is recommended to upgrade to 4.6.0 as soon as practical so you receive the patch to fix the Community Fund Payment Request block reorganisation issue.

You can download the latest version from the NavCoin Wallet Downloads page.

Or for the full release notes and checksums visit the 4.6.0 release on GitHub.

With the release of NavCoin Core 4.6.0 the number of contributors with commits merged to master has grown to 21. The work by the interns from Auckland University has finally been published cementing their place in NavCoin’s history. New addition to the NavCoin development community mxaddict has been capitalising on Alex’s dev bounty program and already has 9 commits merged to master with 8 more pending pull requests.

If you want to earn NAV by working on NavCoin Core, take a look at the issues which are flagged with bounty labels on GitHub, or create your own issues and request Alex to assess it and assign a bounty.

The best place to chat directly with the NavCoin Core developers is on the NavCoin Discord Server. They are frequently online and always open to answering questions and helping to get you up and running.

After the alpha release of the NavDroid by Encrypt S, mntyfrsh has been working towards bundling the software into a deb package so it can be more easily installed on most Linux platforms including the Odroid.

This would make it much easier for people to get up and running, instead of downloading a large image file and having to re-flash their device, the process would instead be installing NavDroid as an application.

The NavDroid software is fully open source and the alpha released by Encrypt S does work but it definitely needs further development to be considered production ready. If you have experience working with Angular, TypeScript, NodeJS, HTML & CSS, then this project is a great way to get involved in a blockchain project.

Join the NavCoin Discord and connect with the prole, matt & mntyfrsh to see how you can get involved with this community driven project to help bring staking to the masses.

The inaugural NavCoin Community Roundtable was held this week and the discussion went smoothly and was productive. There is a lot going on across the NavCoin community and it’s discussions like these which help to rally the community together.

If you didn’t manage to make it to the roundtable, the full transcript can be read on the NavCoin Discord #roundtable, or chasethechaser has put together a summary of the discussion in this reddit post;

There are some interesting takeaways from the discussion, including the real need for more participation by the community in various development projects and marketing activities.

The roundtables are scheduled for the first Monday of every month at 8PM GMT with the next one being Monday 5th of June. Make sure you put it in your calendar and get involved.

The community driven vote on how to implement privacy in NavCoin is well and truly underway. If you stake NAV, make sure you cast your vote on this important issue.

If you prefer complete privacy over complete auditability vote YES for this proposal.

If you prefer complete auditability over complete privacy vote YES for this proposal.

Please only vote YES for one proposal and refrain from voting NO. There are a number of addresses voting YES on both proposals, can you please make sure to only vote for the proposal question you agree with the most and remove the other vote.

This week Alex V was interviewed by BitCultura - an Italian crypto community - and also participated in an AMA on their telegram channel. Both the interview and the AMA were were well received by the BitCultura community with some great questions being asked and as always some interesting answers from Alex. You can read the interview at the link below;

We’ve previously reported on the new and rapidly growing platform GiftCards by Bidali which enables the purchase of gift cards with NAV for hundreds of top brands throughout the US and Europe. Bidali has just expanded their services to include Australia, so if you live down under you can start buying everything from groceries to electronics with your cryptocurrency.

You can read the announcement from Bidali here;

There is currently 86,900 NAV available in the community fund with 5 pending proposals and 6 pending payment requests actively being voted on.

This proposal is to translate the NavPay wallet into Romanian.

This proposal is to fund the building of NavCoin Next Mobile wallet.