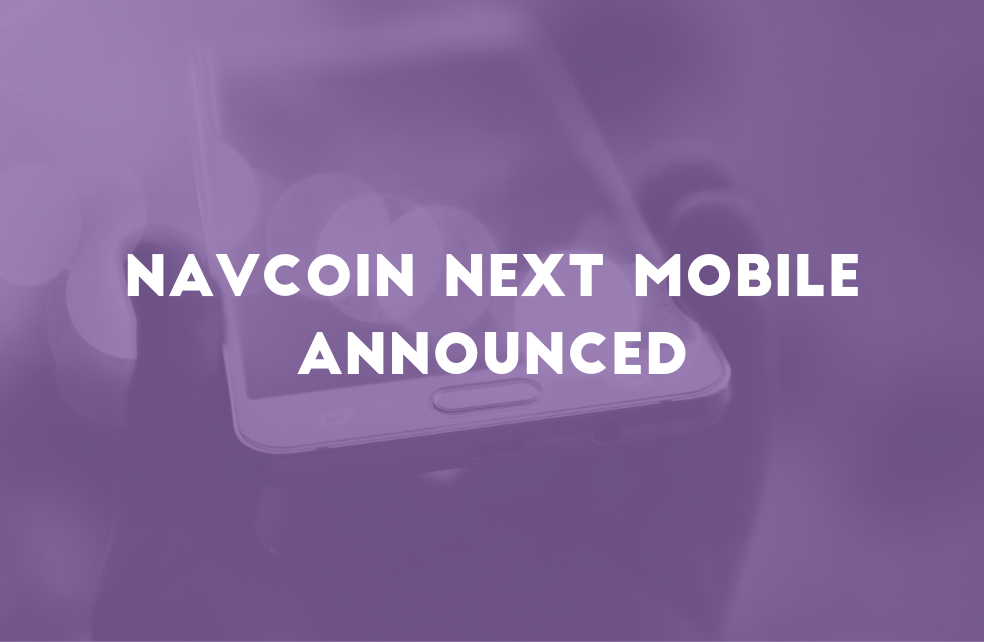 Seyhan announces a mobile version of the NEXT Wallet, NavCoin 4.6.0 gets closer to release and the GitHub Bounty program is brought online.

Lead Developer of the NEXT Wallet Seyhan Akdeniz has announced the NEXT Wallet is being developed for Android and iOS. The news of the mobile wallet comes after his recent efforts to enable the NEXT desktop wallet to run in lite mode. Porting the wallet for use on mobile seems like the next natural progression for the project now that it is capable of sending and receiving NAV without needing to store or validate the entire blockchain.

Additional to receiving, storing and sending NAV, the wallet will be able to both browse and create Community Fund proposals and payment requests.

You can read more about the NEXT Mobile project on the NavCommunity site.

So far two patches have been applied to the 4.6.0-rc branch, fixing an issue that caused the wallet to crash when viewing Community Fund proposals on 64bit Linux and another which caused the wallet to display the whole staked amount rather than just the staking reward from the cold staking spending wallet.

After investigating what caused the bootstrap server to diverge, a patch has been made (#456) to rectify the issue. This patch will need to be tested and merged into the release candidate before the release is made. It’s likely this patch will be the last required before releasing NavCoin Core 4.6.0 and we hope to see the version released as early as next week.

A few weeks ago Alex V proposed to setup a bounty program for NavCoin Core. The Community Fund proposal to fund it passed and now the bounty program is live.

Or to dive in and start earning NAV by contributing to the codebase on GitHub take a look at the issues which are flagged with bounty-xhigh, bounty-high, bounty-med, bounty-low on the issues list and get coding!

Over the last week there has been lively debate on the NavCoin Discord server around privacy vs auditability when it comes to cryptocurrencies. With NavCoin’s new privacy methods under development it’s great to get such active involvement from the community. Given it’s been quite a divisive issue, salmonskinroll has put together two community fund proposals to poll the networks preference of complete privacy versus complete auditability.

If you prefer complete privacy over complete auditability vote YES for this proposal.

If you prefer complete auditability over complete privacy vote YES for this proposal.

Please only vote YES for one proposal and refrain from voting NO.

While the vote is not binding it is a good way to gauge sentiment of the stakers on the issue. Any changes to the fundamentals of the NavCoin protocol need to be approved by a super majority of stakers, so it’s worthwhile understanding the will of the network before committing further resources to the complete privacy implementation.

As discussed last week, the NavCoin Community will be hosting the first Community Roundtable this coming Monday. If you want to have your say or simply be across what the community is discussing then please join us for it on the NavCoin Discord server on #roundtable.

The Community Roundtables will be held on the first Monday of every month, so make sure to put it in your calendar!

NavCoin has officially joined Binance’s transparency initiative and gained the V Label badge on Binance Info. By sharing project related information such as news and progress reports on the Binance Info site, NavCoin Core continue their efforts to keep the community informed.

While the label can’t be taken as an endorsement by Binance, it is surely a show of good faith displaying how the NavCoin community strives to operate in the open. You can read more about the V Label in Binance’s announcement below.

From 1 May 2019 you will be able to purchase NAV with both GBP and EUR in Europe from Vertbase’s non-custodial instant exchange service. This opens up NavCoin’s second European fiat onramp and is a welcome addition to the growing list of services that support NAV.

For the full list of supported countries, banks and cryptocurrencies, check out the announcement from Vertbase on Medium.

There is currently 107,500 NAV available in the community fund with 5 pending proposals and 4 pending payment requests actively being voted on.

Alex V has requested compensation for the features he built that are part of the 4.6.0 release candidate of NavCoin Core.

This proposal wants to translate NavCoin.org to both Slovak and Czech.