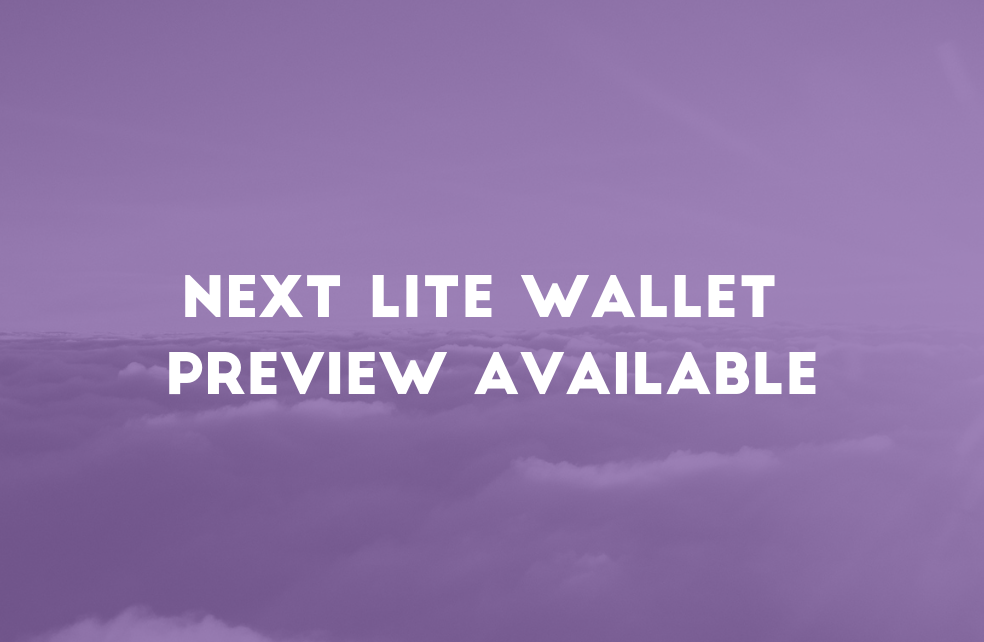 The NavCoin Community is a hive of activity this week with NEXT launching their lite wallet preview, the Bulletproofs Library being added to ZeroCT, three articles published about NavCoin and a BTC/NAV pair being added on NovaExchange.

The NavCoin Community is a hive of activity this week with NEXT launching their lite wallet preview, the Bulletproofs Library being added to ZeroCT, three articles published about NavCoin and a BTC/NAV pair being added on NovaExchange.

The NEXT Wallet developers have released the public alpha version of their lite wallet for NavCoin. NEXT first launched in June 2018 as an alternate interface for NavCoin Core. Since then NEXT has added support for multiple cryptocurrencies running as full nodes including LTC, DASH, PIVX and more. Updates have included advanced features for NavCoin such as community fund integration, news and a marketplace.

This latest release includes the capability to send and receive NavCoin without needing to download and validate gigabytes of blockchain data. After creating a wallet and securing it with a passphrase you can instantly start using NavCoin. The private keys never leave your device and signed transactions are sent to the broadcast server from the wallet which are unable to be tampered with in transit.

The lite wallet capability is still being tested by the development team, so if you want to check it out and participate in the public beta test then please download the latest version and join the navcoin discord server to give your feedback.

As with all pre-release software that is being publicly tested, be sensible with how much NAV you move there until a stable release is available.

Alex has been working to add the Bulletproofs Rangeproof Library to the ZeroCT implementation committed by Skreener. The Bulletproofs Library is now committed to the PR along with some initial unit tests. This is the first step towards moving away from denomination based accumulators and including confidential transaction amounts into the ZeroCT implementation. Marcus and other community members have been helping to test the ZeroCT PR and continue to work with Alex towards finishing and stabilizing this new privacy protocol implementation.

Other progress on NavCoin Core has been made this week the NavCore Interns who continue to work on the Community Fund interface and Marcus who has been working on a range of GitHub issues and testing the existing Pull Requests.

Community Members Juguelio and Chasethechaser have been working hard to get NavCoin listed on new exchanges over the last few weeks. This week a BTC/NAV pair has been added to NovaExchange with more listings in the works.

NavCoin in the News

Over the last week there have been multiple articles published about NavCoin as crypto news websites around the world start to take notice of this great project and strong community. Check them out below.

CoinCentral: What is NavCoin? A guide to the usability-focused privacy coin

The API for the NavExplorer has been migrated to ElasticSearch and GoLang. This architecture change should provide a performance increase to the NavExplorer API by offering scalable, enterprise grade searching of NavExplorer’s data. The API has now been opened to the public and implementation details can be found on Prodpeak’s NavExplorer GitHub repository.

Matt & Alex have continued work on the NavDroid StakeBox adding a notifications widget and service that can alert the user if the daemon is down, there’s an update available or other various warnings. They’re moving onto the wallet functionality after refactoring the Community Fund widgets and finishing the home page overview. To keep up to date with the latest progress on this project make sure you follow the NavCoin Angular GitHub repository.

The Blockchain Association of NZ is hosting NavCoin’s Co-Founder Craig MacGregor to speak at their speaker series in Auckland. Craig MacGregor will be presenting an overview of NavCoin, how it has evolved since its creation, what challenges the team has faced and what lies in the road ahead, followed by a Q&A session. The event is free entry but you must register on the Meetup Event; BlockchainNZ Talk - Craig MacGregor from NavCoin to reserve a seat.

This event runs from 5:30pm - 7:00pm after which the NavCoin Core team will be heading over to Jack Tar for the NavCoin & Cryptocurrency Meetup from 7:00pm - 9:00pm which is a more casual social event.

There is currently 119,578 NAV available in the community fund with 6 pending proposals and 3 pending payment requests actively being voted on. If you are staking coins make sure you head on over, learn what they’re about and cast your votes accordingly.