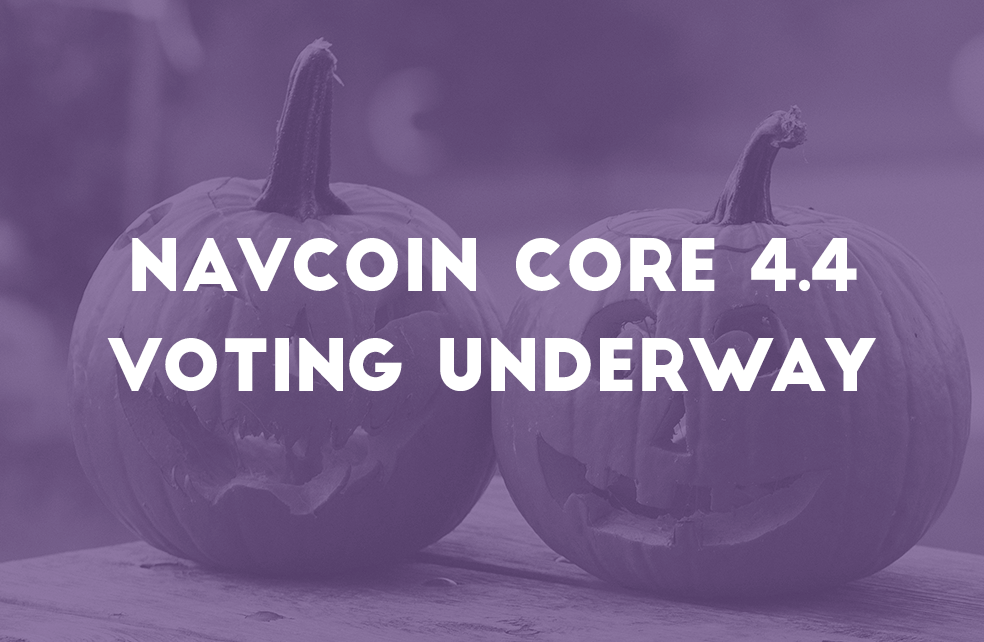 Last week was a major milestone in NavCoin history with the release of the Community Fund soft fork. It’s especially significant because it’s a world first - NavCoin has the only truly decentralised fund that uses a dual community voting mechanism to manage both the approval of projects and the distribution of funds. The next step for the Community Fund is activation and for that to happen it’s necessary to get network approval for the NavCoin 4.4.0 soft fork. As always, you can see the release notes on GitHub.

Last week was a major milestone in NavCoin history with the release of the Community Fund soft fork. It’s especially significant because it’s a world first - NavCoin has the only truly decentralised fund that uses a dual community voting mechanism to manage both the approval of projects and the distribution of funds. The next step for the Community Fund is activation and for that to happen it’s necessary to get network approval for the NavCoin 4.4.0 soft fork. As always, you can see the release notes on GitHub.

At the time of writing 40% of the nodes on the network have upgraded to NavCoin 4.4.0, which, when taking into consideration the number of coins being staked puts the overall soft fork vote at 65%. Once approval reaches 75% the consensus necessary will be achieved and after a week’s lock-in period the NavCoin Community Fund will go live. For this reason it’s important everyone on the network updates their wallet as soon as possible, and gets their vote counted. So if you haven’t already downloaded the latest version of the Core Wallet do it now.

There will be announcements in social media when NavCoin Core 4.4.0 has been approved. Once consensus is reached there will be a one week lock-in period and after that, the NavCoin Community Fund will be activated and open to your submissions. You can check the progress of the network consensus at the NavCoin block explorer.

The new NavPi image will be a refreshed version of the image that you can download and flash to an SD Card when you’re setting up your NavPi. The new image will include the up-to-date blockchain, NavCoin 4.4.0 and a simplified version of the UI for basic Community Fund interactions. Keep an eye out for this release in the next few days.

Currently there are three votes underway as part of NavCoin Core 4.4.0. There is the Community Fund activation discussed above, plus two NavCoin Protocol Improvement Proposals - NPIP003 and NPIP005. A fourth - NPIP004 - is currently up for discussion.

This proposal aims to save space on the blockchain by having fewer transactions in each block. So rather than depositing money to the Community Fund in small amounts every block, it will be done in a single large amount every 500 blocks.

The idea behind NPIP005 is to double the amount of NAV that the network contributes to the Community Fund from 0.25 NAV per block to 0.5. It’s hoped that this will result in more proposals being worked on and completed. Check out some of the most recent discussions in this Reddit thread.

NPIP004 proposes moving to a static block reward scheme to better incentivise stakers to assist in increasing network security. It’s planned to include this NPIP in the upcoming NavCoin 4.5.0 as a soft fork. Please check it out on GitHub, and feel free to critique it constructively.

Alex has created this Youtube video which shows the first private test transaction of the new privacy solution he’s been working on over the past couple of months. The test was conducted between two wallets that he controls, on a test blockchain he has set up himself.

Community member Rastislav Durove has come up with an idea to translate NavCoin websites into Slovak and Polish. He would then present drug education at high schools in Slovakia and Poland relating his anti-drug message to how digital currencies can empower individuals and give them control back over their lives. To see more on this and other proposals visit the NavCoin Collab website.

Get ready for the Digital Hackathon

If you’re thinking about getting involved in the upcoming Hackathon make sure to join the NavCollab website and create your profile. Doing the Hackathon is a great way to practice making a compelling submission to the NavCoin Community Fund. The Hackathon will ready to go shortly, so please standby for updates.

Alex and Paul on Nugget’s News

Nugget’s News is a cryptocurrency vlog on Youtube, and earlier this week Core developers Alex and Paul joined Nugget to answer the question ‘What is NavCoin?’. When you have a moment it’s well worth watching this video to get an insight into the NavCoin ecosystem from two of the people who know it best.

The redesign of Navhub.org is currently the main focus of the content creators. Like the recent refreshment of NavCoin.org this is an extensive project entailing building new pages, and improving existing content, all aimed at making NavHub.org a better resource for community members.