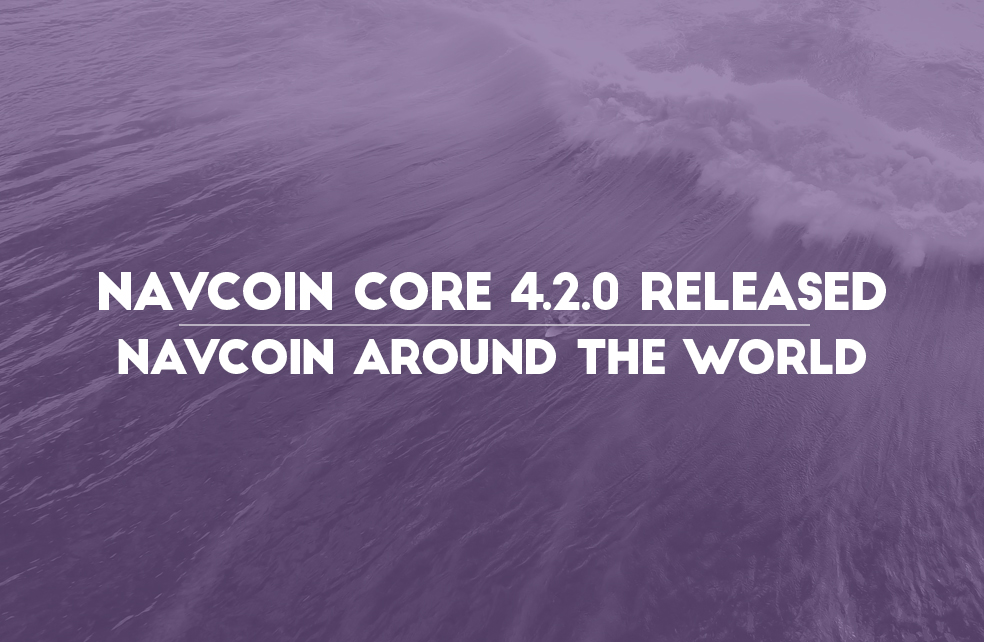 This week the big news is that NavCoin Core 4.2.0 has now been released that includes two soft forks requiring approval by the network. This core protocol update involved developers throughout the global NavCoin community - so a big shout out to all those who contributed their time and expertise. It’s more proof that NavCoin’s decentralization really works! But it’s not just NavCoin developers who have been working hard, as you’ll see there has been lots of other exciting community activity happening all over the world.

What’s happening in the community

One of the best things about being part of the NavCoin community is that you don’t have to be a skilled blockchain developer to make a worthwhile contribution. You might be used to seeing tech updates from the NavCoin Core Developers using @NavCoin on Twitter, but did you know that @NavCoin_Global on Twitter is a great place to go to catch up on everything that is going on in the wide world of NavCoin. Join the conversation here:

Nav_whale (on Reddit) is looking for support from the community to help get a busy taco shop in Minneapolis, USA over the line in accepting NavCoin. But please only do it if you live in the area and will be a customer - it wouldn’t be nice to spam the shopkeeper.

The ever creative Beekart has had an idea for using a traditional medium to promote next generation digital technology - a NavCoin billboard on a busy motorway. Could it be a potential Community Fund proposal? What do think? 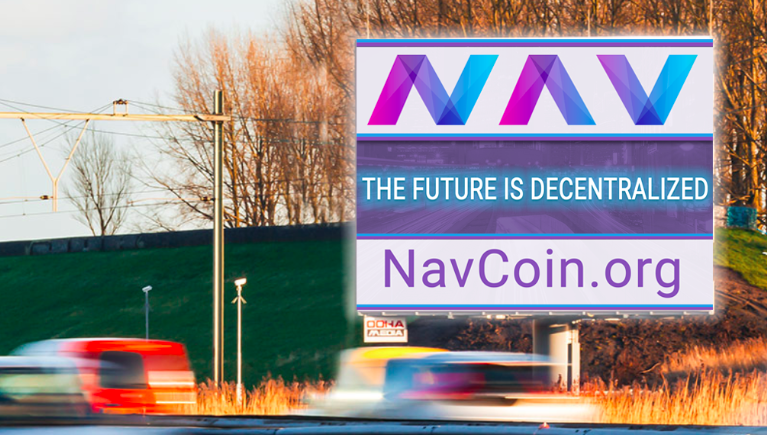 Meanwhile in Australia, Brisbane Airport is looking to become the world’s first crypto friendly airport. Chasethechaser (on Discord) suggests that community members get in touch with TravebyBit and let them know why NavCoin should be one of the currencies accepted at the airport. Reach them here https://www.travelbybit.com/contact

For some background check out this vid on Youtube: 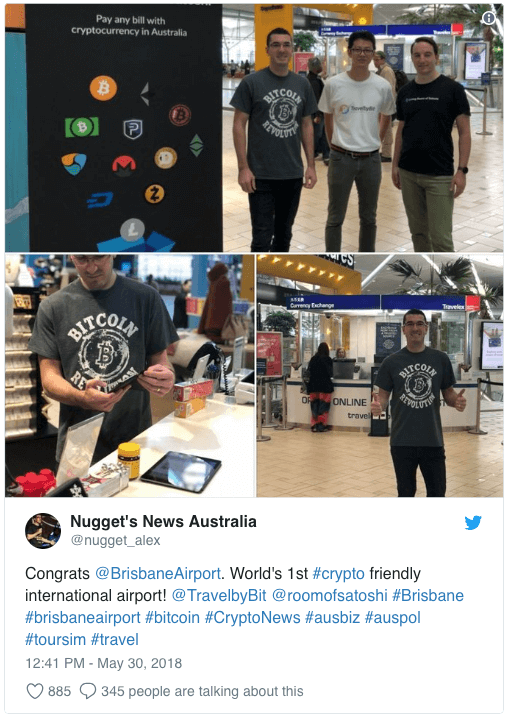 CoinPayments is NavCoin’s crypto payments provider. They are leaders in this space, and support NavCoin - so it’s worth following and supporting them in return. Check them out on Twitter @CoinPaymentNet and take a look at the directory of merchants that accept NAV through their gateway.

On his way to work in Berlin, Matt (a core developer from New Zealand) caught up with NavCoin Italia in Rome. 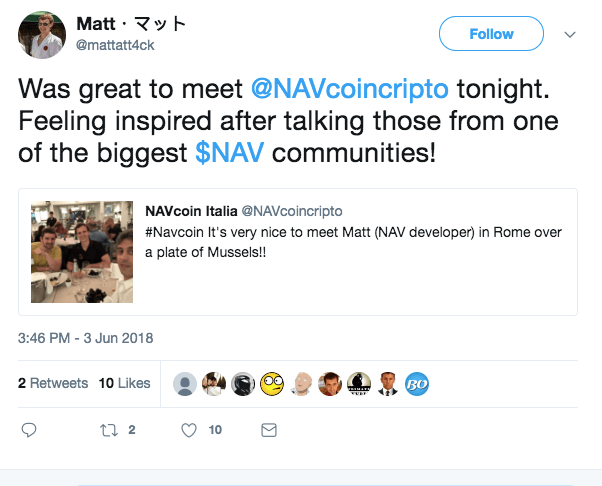 Crypto is big in Russia, so it’s good see Nav Coin Russia letting local enthusiasts know how easy it is to get involved in the NavCoin community. Follow it @NavCoin_Russia 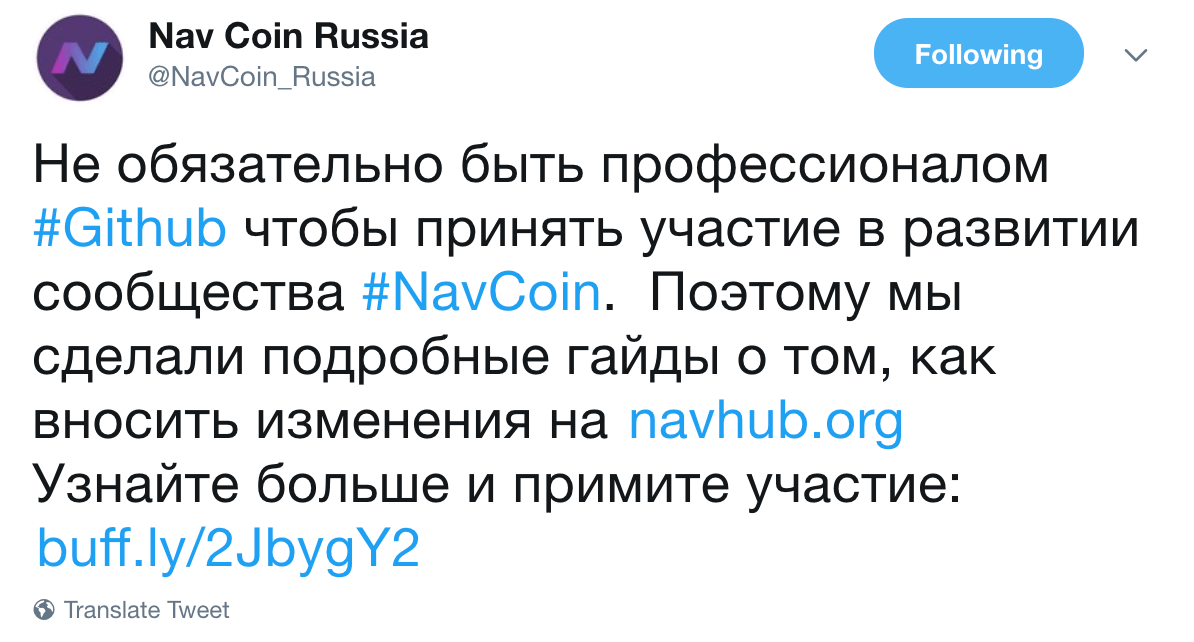 After successfully going through the retesting process, the pull request for NavCoin Core 4.2.0 has been approved and the updated code merged into the mainnet. This soft-fork enables the accumulation of NAV in the Community Fund ahead of the Fund’s launch in the coming months. It also fixes the Clock Sync bug caused when a staker has their computer set to the wrong date.

Here’s a quick recap on what NavCoin 4.2.0 achieves for the Community Fund:

You can read more detailed information about the changes here:

Because this is a soft fork, it’s important that the NavCoin network agrees to the changes. Network consensus needs to reach 75% before the changes be activated and accumulation to the Community Fund begins. All you need to do to signal your agreement is download the latest version of the NavCoin Core wallet. You can find the download links here:

The 4.2.0 update has been found to cause an unexpected issue when upgrading with the NavPi autoupdater and we’re working on a patch to fix the problem as soon as possible. If you’re using a NavPi please read this post to find out more information about when and how you can upgrade:

Hash512 (on Discord) is working hard on his NavM8 stakebox project. His latest focus has been on developing an automatic price adjustment mechanism that responds to the varying value of NavCoin. The idea is that nobody has to pay too much for their NavM8. Look out for updates in the M8 channel on Discord or check it out here:

Work is continuing on porting the latest version of BTCD (the Go implementation of Bitcoin) to NAV to test atomic swaps and Lightning Network integration.

Prodpeak’s NavCoin block explorer is no longer in beta, and is now live - check it out here:

As part of the work being done to refresh NavCoin.org and NavHub.org a page has been added that shows merchants how to accept NavCoin at their shop or online store. See the page here and maybe share it with a retailer you know:

There is also a new section on the NavCoin.org website to house release notes for updates to the core protocol. You can find the notes for NavCoin Core 4.2.0 there now: