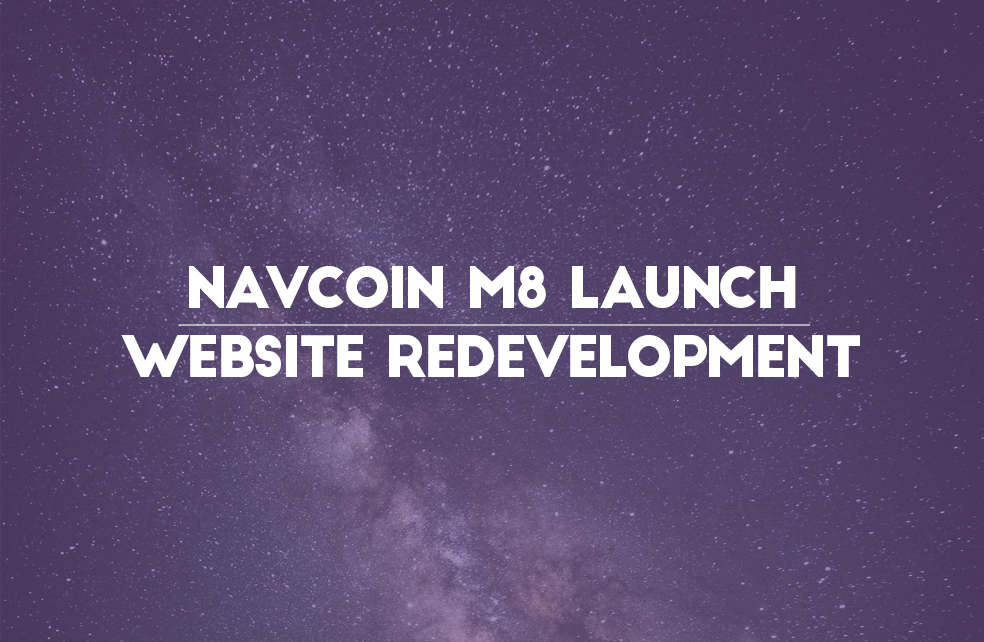 This week sees the launch of a long-term project by community developer Hash512 - his NavCoin m8 staking device is ready to go later this week. Check out the description of its features a little way down the page, and give your support to this ambitious community project.

This week sees the launch of a long-term project by community developer Hash512 - his NavCoin m8 staking device is ready to go later this week. Check out the description of its features a little way down the page, and give your support to this ambitious community project.

Another community developer Prodpeak has been extending the capabilities of his project the NavExplorer - which is a block explorer for NavCoin that allows you to view transactions and blocks as they happen. His pull request on GitHub has just been approved meaning the next release of NavPay and NavCoin Core will use NavExplorer to display detailed records of your transactions. Find out what else he’s been doing in the Developer Updates section below, and view the NavExplorer here:

The new NavCoin m8 staking device is ready to go, and the official release date is 18 August @ 18:08:08 UTC. Here is an overview of its features by its creator Hash512 (on Discord):

“Imagine a device that has at least four cores over 2GB of RAM and runs Ubuntu 18.04 Mate Desktop, stakes NAV via a NavCoin NEXT wallet, is nicely packaged in a commercial device less than 12 cm square and less than 2 cm high and costs less than two beers at the pub to run per year! NavCoin m8 can run off any USB port that can output a reasonable amount of power. It has ethernet, Wifi, and can support a USB hard drive up to 2TB. NavCoin m8 website will support purchases via the official currency of the NavCoin m8 - NAV. There will be more models released in the coming months, but they will all be similar in configuration and operation.”

For more details visit the Navcoin m8 website or join the Discord channel.

Prodpeak has deployed OpenAlias integration to the NavExplorer’s testnet browser. Community Fund indexing is also in progress, plus development of support for Cold Staking. All the code Propeak has developed for these projects is open source, and the repos are available on GitHub. You can view the code here:

Sakdeniz has been hard at work to release the latest version of the NEXT wallet - available for Windows, MacOS, and Ubuntu. This has a number of improvements, including the additional support of other cryptocurrencies.

You can view the release update which was published on NavHub here: https://navhub.org/news/2018-08-13-next-wallet-1-0-4-released

The Core developer’s key focus in the past week has been on refreshing navhub.org and navcoin.org. The revised sitemaps are being finalised, some pages were moved between the sites, and a new page was built for the Community Fund on NavHub. The overall objective is to make the role of each website clearer, and to improve and expand the resources available to the community.

Two new NavCoin Protocol Improvement Proposals (aka NPIP) have been submitted to GitHub.

The first proposes a change to the way funds are added to the Community Fund in order to reduce blockchain bloat. It can be read here:

The second is a draft proposal to change the NAV block reward to a fixed reward at two NAV per block. This proposal is intended to incentivise stakers to remain online full-time, which helps maintain network security. This suggested change will shift NavCoin’s Proof of Stake implementation towards version three, which is generally seen in the development community as the most up to date version. It can be viewed here:

Remember, these NPIPs are not set in stone roadmap items, they are merely proposals up for debate and discussion, if you have any thoughts feel free to discuss them on Reddit or Discord.

Testing continued on NavCoin Core 4.3.0, including the new versions of NavPay.

And to help with this two new members have been added to the Auckland team. Marcus and Gal are university students who will intern with Encrypt S while they complete their studies. Marcus is majoring in computer science and Gal is completing his PhD in mechatronics. Initially, to kickstart their blockchain skills, they will be involved in testing the Community Fund.

The website refresh also occupied much of the content contributors time. Following best practice in UX/UI it’s crucial that visitors to the NavCoin websites are able to understand immediately what each website is about, and that they can find what they need quickly and easily. As part of this new and updated pages are being created, and more video content is being developed.

NavCoin OpenAlias is still a major focus as you are now able to register your OpenAlias address. If you haven’t already claimed yours, why not do it now.