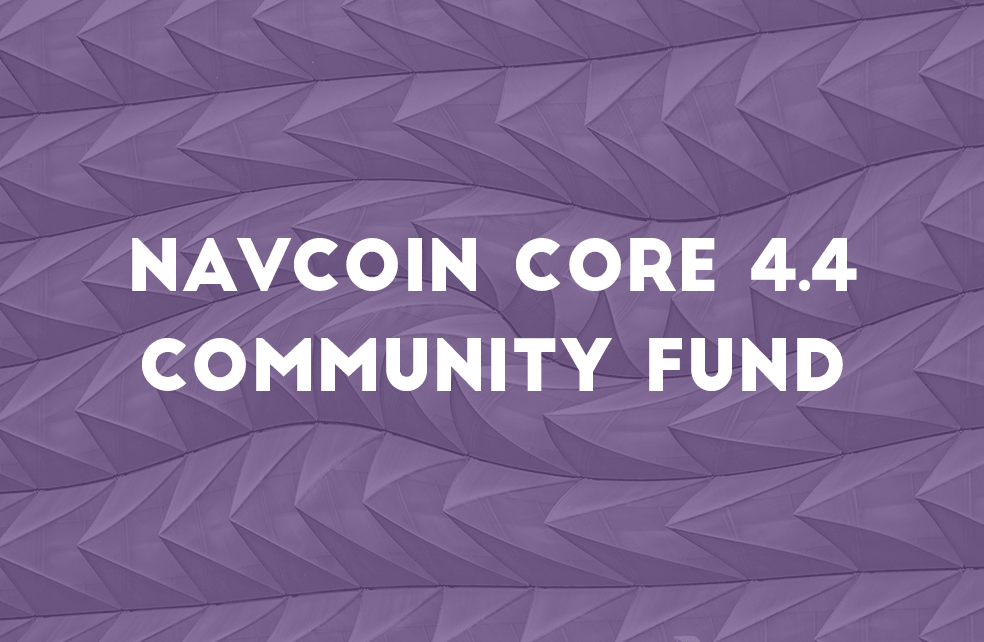 This is an exciting day for everyone in the NavCoin community. NavCoin Core 4.4.0 has been released. What’s most significant about the latest version of NavCoin Core is that it allows for the activation of the NavCoin Community Fund.

This is an exciting day for everyone in the NavCoin community. NavCoin Core 4.4.0 has been released. What’s most significant about the latest version of NavCoin Core is that it allows for the activation of the NavCoin Community Fund.

The NavCoin Community Fund is the first in the world to be fully decentralized, both in the way it’s governed and how the funds are managed. Without the participation of many people within the global NavCoin community, it would not have been possible. The NavCoin Core team would like to thank everyone who contributed their time and skill to bring it to life.

With the release of the 4.4.0 wallet, the NavCoin Community Fund soft-fork will lock in once it has reached a 75% network consensus. To signal your approval download the latest version of the NavCoin Core wallet, at NavCoin.org

Once consensus is reached there will be a one week lock-in period, and after that, the Fund will be activated, and open to submissions.

You will be able to submit your proposal using the built-in proposal form in the latest version of the NEXT wallet, or via RPC commands in the NavCoin Core wallet (for details check out the knowledge base article).

It’s anticipated that the NavCoin block explorer will also include a proposal generator tool in the future.

Look out for an announcement in social media when the lock-in of NavCoin Core 4.4.0 is achieved.

To learn more about the community fund - check out the wallet release article by Alex or visit the Community Fund page on the website.

Last week Craig presented the third in the series of live-streamed public education sessions, which focused on the Community Fund. If you weren’t able to make the live stream, don’t worry, you can still watch it on NavCoin’s Youtube channel, along with the first two live streams and other NavCoin videos. There will be more live streamed sessions in the future. Look out for updates here and in social media.

With so many different projects going on it’s easy to lose sight of the big picture. With that in mind, Craig put together this project summary document for a high-level view of where NavCoin is heading. This is a great document to share with people new to the NavCoin community.

Cyber Pan has proposed a bus advertising campaign to raise awareness of NavCoin in major cities. Already there is some interesting discussion going on. Follow this Space if you would like to find out more and contribute your own ideas.

The Hackathon is coming soon.

Are you looking forward to the NavCoin Digital Hackathon? It’s not far away. The first step is to join the NavCoin Collab website and create a profile. Once you’ve done that you’ll be ready when Hackathon registrations open - standby for more details soon. Note: some users are having issues registering for the NavCollab site, but developers are working on fixing the issues, so we appreciate your patience.

For some halloween fun @Powertrader200 is putting on a NavCoin pumpkin carving competition! Post a picture of your NavCoin pumpkin with the hashtag #NavCoinPumpkin anytime before October 31 for a chance to win 250 NAV.