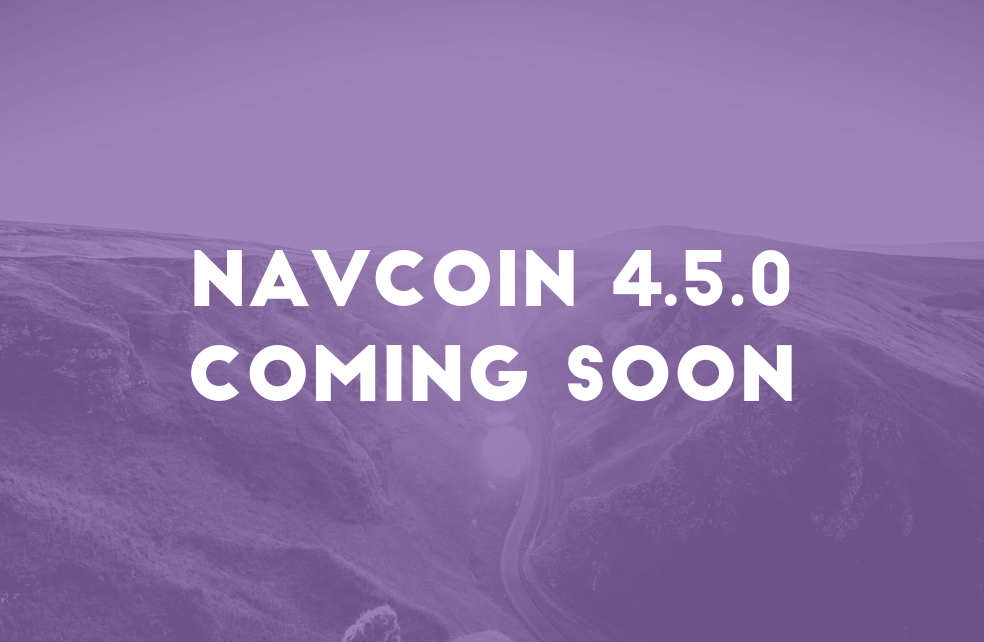 Welcome to the second to last edition of NavCoin community news for 2018. After next week the community news will be having a break for the Christmas holidays, but it’ll be back in mid-January 2019.

Welcome to the second to last edition of NavCoin community news for 2018. After next week the community news will be having a break for the Christmas holidays, but it’ll be back in mid-January 2019.

Over the last week, the Core developers have been mainly focused on testing, merging and retesting all the features included in NavCoin Core version 4.5.0. Now that everything is merged in and being tested, the last step is to finish cross-platform builds on various servers to check everyone gets the same checksums. NavCoin Core version 4.5.0 contains many new features including the soft forks for Cold Staking and Static Rewards. To read the full feature list, check out the release notes on GitHub.

NavCoin Core 4.5.0 is scheduled to be released over the next couple of days, so keep an eye NavCoin’s protocol notices for the release announcement and make sure you upgrade when the new version is available.

Developers have started to build out the designs for the rebuild of the NavHub website. NavHub will now benefit from the same UX improvements as NavCoin.org with the redesign intended to simplify the site while adding more utility. It will be clearer, more visually appealing and more intuitive to use. One of the goals for the site is to have more resources for community members - enabling you to participate in the community more easily and generate your own NavCoin projects/assets.

Two new software engineering interns join the Core team today from the University of Auckland. They’ll primarily be working alongside Matt on various tasks until their studies begin again in March 2019.

Andreas and Hayden are both in the process of getting set up, and next week we’ll let you know their nicknames so you can reach out and welcome them to the NavCoin community!

There are now 12 proposals being voted on, so if you’re staking the network please make sure to join in the voting. Proposals require a minimum 50% participation rate to be accepted into the network, so your vote is important.

A couple of the proposals are getting very close to passing! So make sure to check out the Community Fund site and cast your vote now.

This week there was another proposal into the community fund - a live action promotional video about NavCoin by NYC Filmmaker Romel (Cryptomoonie). You can view the proposal here.

Salmonskinroll and prodpeak are trying to find out all the addresses that belong to exchanges - in order to provide more context when looking at the NavCoin rich list. The theory is that exchanges (such as Binance/Poloniex/Bittrex) have large amounts of NAV on their addresses - which makes the rich list seem more unequal than the reality, as those coins are ‘owed’ to individuals. If you would like to help out, please reach out to them on Discord.

There was an update to the NEXT wallet - helping to fix an issue with the wallet not closing down properly on mac. It didn’t stop the daemon from running, which then would require a device restart to fix. To download the latest version of the wallet please visit the NEXT website.

Last week we highlighted a handy guide on how to vote for proposals written by community member siflu (on Discord). If you need any help with voting it’s a great place to start.

In NavCoin 4.5.0, there will be a user interface in the core wallet, making it much easier to vote (as simple as clicking a button) for proposals.

To use the Collab site to post Community Fund project ideas for discussion, and to help other community members with theirs, the first step is to register and make your profile. It’s easy and only takes a moment, so why not do it right after you’ve finished reading this?